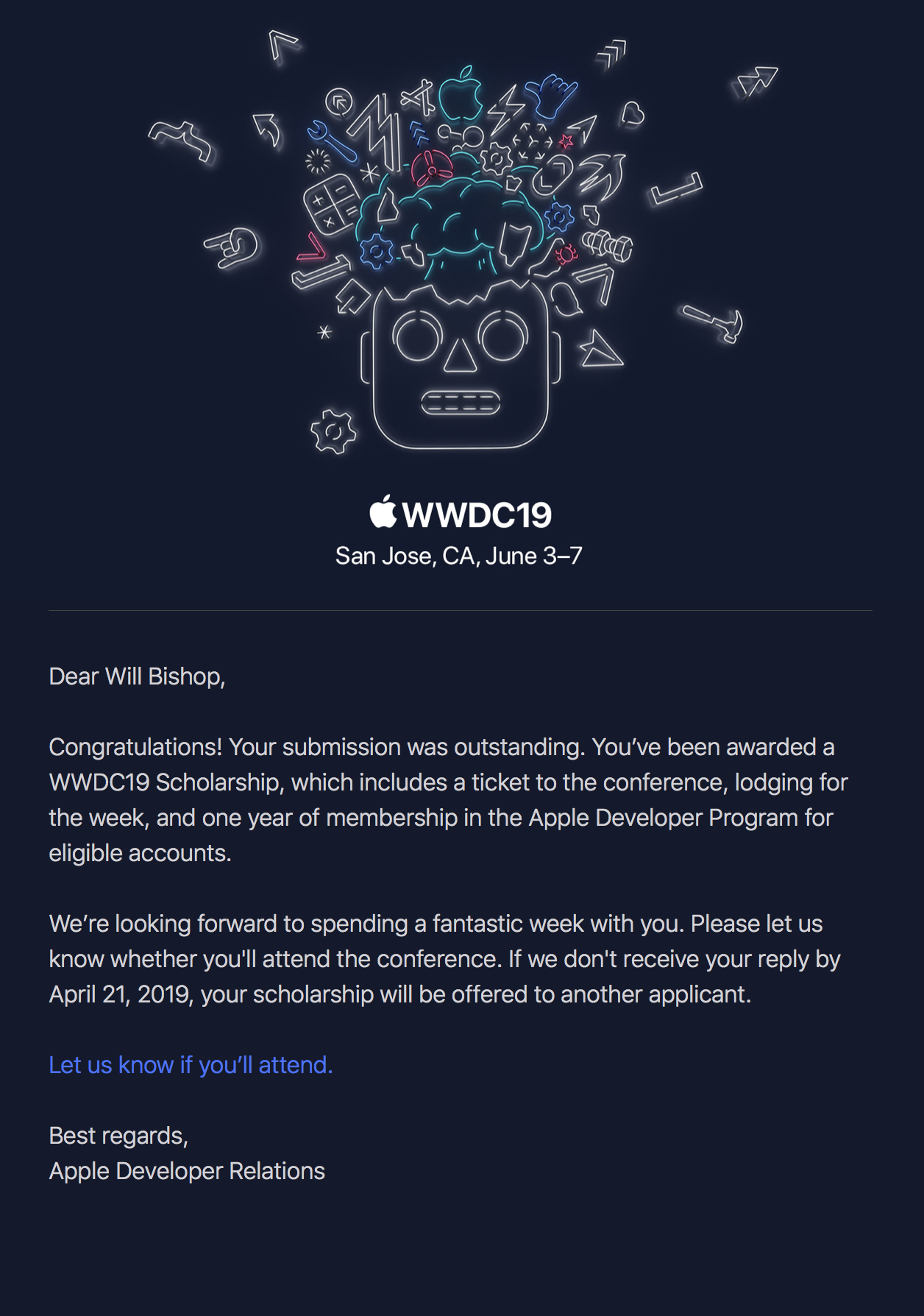 For the last two WWDCs, 2017 and 2018, I really wanted to submit a scholarship entry but never actually got around to it. Xcode Playgrounds frustrated me and I didn’t really know how to use them efficiently. It wasn’t until 2019 that I even began looking at Xcode Playground in-depth, and not until WWDC19 that I began making a real project for it.

In the past, Apple has given developers upwards of two-weeks to create their playgrounds and write the (previously) 1500-word three-part essay. This year, however, was different. WWDC Scholarships were announced later than usual, with the “It’s Show Time” event being announced in its place. I’m speculating here, but I assume that is why the time constraint was much shorter this time around, at a mere 10 days.

My initial feelings were… not so great. The scholarships were announced around 3AM-ish my time, so around said time I sent some not-so-positive texts. I did try and find some screenshots but I failed, so here they are to the best of my memory

The scholarships are out

They’ve given us 10 days

There’s no way I can do it

That said, I opened Xcode and hit File > New Project, and I had started.

Luckily for me, I’d spent some time before the announcement pondering what projects I could make. I figured it would be easiest to make a game, despite never really using SpriteKit. I’ve heard it’s been done before, but ultimately my final (and first if I recall correctly) idea was a level-based game consisting of 5 levels, starting at ‘Start’ and finishing at ‘WWDC’.

In the beginning, it didn’t look so great. Design is always hard, and designing games is surprisingly a lot different to designing apps. There are no standard resources you can use (besides creating squares or something of the sort), so design-wise you’re on your own.

I decided to use a floating-levels design, and then I could use some clever-code to draw lines between the levels to connect them. With this, I could move the levels around freely and the lines would always still connect them perfectly.

I then added some level numbers, and this was all before I started designing levels themselves.

Deciding what to have in each level was probably the hardest part. I decide early on that I wanted to have each level focusing on a different element of early-education. This gave me two advantages:

The levels went as follows:

Each level consisted of a challenge (or three), that was the user solved the game automatically progressed to the next level.

The game is done, well, it’s done-ish. It’s pretty ugly at this point though. In order to spice things up a bit, I looked no further than WWDC itself.

I removed the white circles for each level and replaced it just the level number. I changed the font throughout the app to use a halogen bulb font, similar to the neon-sign designs on Apples website

Might not seem as important, but between each level I wanted a cool transition. I add an ease in zoom into the level names, and then a door-open transition effect. When the user finished the level I did the same but in reverse. Then I added a little plane emoji that flew between each level, signifying me (hopefully) flying to WWDC.

Not much to write for this one, but If I can give one piece of advice it’s:

Get other people to use your playground!

I can’t stress this enough! Your playground may only make sense to you. That makes sense though, you made it, you understand it. In my case, it wasn’t clear how to start. Do users click start? Do they click a level? In my music level it wasn’t clear how they actually make sound. Moral of the story is, get others to test it and you will find so many problems you never knew existed.

Many of the essays included with the scholarship application are marked “(Optional)”, you can ignore that… pretend it says “(Mandatory)”.

Some people say the less you write the better, so long as you answer the question and say all you need to. I’m kinda different, shoot for the 500 word limit, remembering that’s it is a limit. Each of my essays were around 480-500 words, with the exception of the final “Additional Comments” essay.

Once you’ve finished your game, written your essays, and crossed your fingers, you’re ready to submit! The process doesn’t take too long, but one mistake I made was leaving the tab open for so long that by the time I hit submit, my session has expired and all the content from the page was gone. It’s for this very reason that you must write your essays literally anywhere other than the submission page.

The hardest part of the whole process wasn’t racking my brain for ideas, balancing it with my school work, or writing 2000 words, it was waiting 3 weeks to hear from Apple. It was predicted that the results would come out at 12:30PM PT, as they did last year… they did not. They came out about 3 hours later, and those 3 hours easily felt longer than the 3 weeks.

I can’t really give any advice for waiting, just get on with how your life was before working tirelessly for 10 days and hope that you get it. I had my hopes very very high, so if I hadn’t got it I wouldn’t been pretty disappointed.

One thing that’s important to remember though, just because you didn’t get it doesn’t mean your playground sucked, or your essay sucked, etc. You are guaranteed to learn something from the process and the worth of that can not be understated. It’s easy to look at it as “if I get rejected it was all a waste”, but in reality that’s not the case. There’s always WWDC 2020, 2021, 2022, etc.

By far the best part of the whole process was getting the acceptance email. The WWDC Scholars Discord was buzzing, Twitter was exploding, and I was sat on the bus, probably listening to The Strokes or Albert Hammond Jr, when a little notification popped up saying nothing more than “Apple Developer”.

Needless to say, on a crowded bus there wasn’t much of a reaction to be had. I couldn’t jump for joy or scream or really anything. All I could do was weirdly smile at my phone and immediately open the Phone app to tell my family.

The importance of having a good idea can’t be understated, the content of your playground as well as the content of your essay is important, but if either is lacking your chances are dampened. WWDC scholarships are not easy things, they come with a lot of stress, both before submission and after receiving it (at least in my case given 49 days to plan an international trip). If you’re reading this is probably means you’re a WWDC 2020 Scholarship hopeful, and to you I say good luck!

As always, if you have any questions about WWDC scholarships, Swift, or just to ask how my day’s going, you can email me here

How I reached 10,000 users in 4 days
Creating a beautiful website for your Anchor podcast programatically

Fixing labels having a finite length in WatchKit

How to make your first WatchKit app